Garner Dance Theatre is the collection of student dancers and choreographers representing the Dance Department at Garner Magnet High School.  We value diversity and promote a safe and supportive environment in which to learn and create. We have established a culture of discipline and respect and always strive for excellence.
It is our philosophy that great ability is a process. Once you have achieved a goal, your next step is determine how to continue to enhance what you have gained.

We have a strong tradition of modern dance. 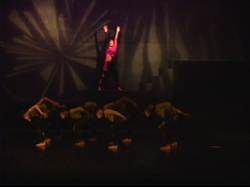 GMHS Dance Theatre began in 2004 under the direction of Sabrina (Arnesen) Penuel. GMHS was in the process of becoming an IB school and wanted to add dance to its curriculumn. Over 160 students signed up for the course before Administration hired a dance teacher. It was this passion and and interest that gave birth to  GMHS Dance Theatre.

In 2004, the first dance course was offered. The program began with 6 sections of Modern I and no dance studio. Classes were taught in the main cafeteria, in the front lobby of the school, and in the auditorium. This was not ideal and a challenge to the whole department.

To support Mrs. Penuel and the dancers, the GMHS Dance Boosters were formed from talented and caring parents and students supporters. This organization helps raise money to pay for costumes, music, field trips, guest artists, dance attire for class, and just about any other expense related to a dance production. This fantastic and enthusiastic group of volunteers give of their time to build and sustain a program that the students can truly be proud of.
In 2006, Mrs. Penuel  helped author the GMHS proposal for the Magnet School Assistance Program grant. After being awarded the grant, the Dance Department received approximately $300,000 in the way of books, music, technology, costumes, opportunities for staff development, student field trips, resident artists, and the addition of another dance teacher.

From August 2016-June 2018, the dance department and the rest of Garner High school underwent a major facility renovation.  During these two school years, the entire school was relocated to a new site, which would eventually become South Garner High School.  During that time, the dance department offered dance classes in three separate locations (9th grade campus, and two rooms on South Garner Campus).

For the 2018-2019 School year, Garner High celebrated its 50th anniversary in a brand new facility and the Dance Department celebrated its 15th year.

Sabrina (Arnesan) Penual contributed to the GMHS Dance Department from 2004 to 2014.

Ashley Walker Anderson contributed her talents, teaching Ballet and World Cultures, from 2008 to 2010.

Mrs. Jennifer Parker contributed to the GMHS Dance Department from 2011 to 2016.  During her time at Garner, she taught Ballet, World Cultures, Modern, and IB Dance.

Mrs. Jamie Shakur contributed to the Garner Dance Program from 2016 to 2018.  While at Garner, she taught Ballet, World Cultures, and Intermediate Modern.